Rodborough Common is a 116-hectare site situated on the outskirts of Stroud, Gloucestershire.

The site is now owned by The National Trust and was cited as a Site of Special Scientific Interest (SSSI) in 1954. The site is also a Special Area of Conservation (SAC), in part because of its herb-rich limestone grassland. The common is overshadowed by Rodborough Fort. Originally built in 1761, and then rebuilt in 1868, this is now a private residence. The common has also at some point had a quarry that has provided many dips and undulating slopes, perfect refuges for wildlife.

The site is well known floristically and is one of the sites in Gloucestershire where the rare Pasque Flower grows in low numbers. This lovely purple flower attracts people from all over the country. The site is also well known for orchids because, at the start of the season, the site is a sea of purple as the early purple orchids come into bloom. One of the largest colonies of these orchids that I know about. There are other orchids like pyramidal, common spotted, musk, common twayblade, and bee orchids to name a few.

The site supports one of the largest UK colonies of Duke of Burgundy, a butterfly that has undergone large national declines. The mixture of grassland of varying swards, with cowslips and scrub, provides the perfect habitat for these pretty little butterflies. There are also good colonies of small blue, adonis blue, dark green fritillary, green hairstreak, marbled whites, chalk-hill blues, and dingy skippers. There is a recent attempt to reintroduce the large blue butterfly, previously extinct in the UK, which is still ongoing.

Moth-wise, the site has the small but very attractive Pyrausta Nigrata moth, black with white stripes on its body, and the much larger and colourful emperor moth amongst its number.

Beetles are also well represented on the site, and it is a well-known site for the extremely rare Rock-rose Pot Beetle, which to the untrained eye looks like a ladybird. Its larvae feed on the leaf litter of the Rock-rose plants which are common on this site. There are also colonies of glow worms and a small population of Rugged Oil Beetles.

The grass sward offers protection for skylarks, which can be heard tweeting overhead on any visit. Their future perilously on the edge due to the increasing disturbance of humans and their best friends. All in all, if your want to find wildlife in the area, this is one of the top places to head for! 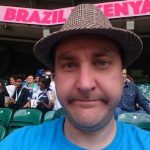